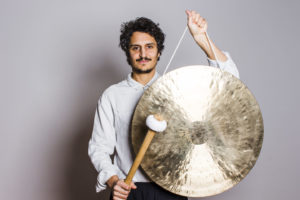 Facebook
Instagram
Manolis is a sound therapist, and a passionate electronic composer and DJ. He has released music under several nicknames including his alias MAMA, ATONOS, as well as Ermes. In 2008 he released his personal debut album ‘Blue’ on The Sound of Everything Records which received rave reviews. Alongside his music career, Manolis has also been a radio producer for several years.
Website

In his Ecstatic Dance sets, Manolis combines a wide variety of music styles and sounds that evoke strong emotions and/or intense movement. The music varies from electronica and folktronica to shamanic music and even classical music. Manolis carefully selects songs that can alter our state of consciousness and help us lose ourselves in the dance.

Manolis is a sound therapist, a meditation practitioner and a passionate electronic composer and DJ. His involvement and love for music started at the early age of 12 with classical guitar lessons. Since then his musical journey has gone through many stages, first as a member of a punk rock band, then as an electronic music producer under the nickname MAMA, releasing in 2008 his personal debut album ‘Blue’ on The Sound of Everything Records, as a radio producer and also as a DJ. He has also released records under his alias Atonos (Revox Records, Taiwan), and Ermes. In 2019, after spending 2 years in London and 7 years in Berlin he decided to move to relocate back to his home country Greece. The last 2 years Manolis resides in Chania in the island of Crete where he is offering his sound healing services and holds Ecstatic dance events.