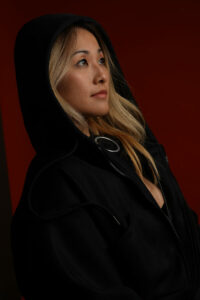 Facebook
Instagram
My Ecstatic Dance sessions aim to connect us back to our inner medicine. I believe we have the power to heal from within and through music and dance we can rediscover the power that is always with us. Having started DJing for Ecstatic Dances in New Mexico and with my personal background as an Asian American, my sounds are inspired by nature, Native American songs, East Asian drumming and instrumentals, deep house, and melodic techno. I look forward to sharing space with you all.
Website

Hailing from Queens New York, GIRL WUNDER (Jessica Wu) brings a fresh style to the electronic music scene with her unique approach to DJing. She tends to nod to both the old and new school crowd, and enjoys bringing in sounds across multiple genres to give something to everyone on the dancefloor. Her ability to generate special and memorable performances is what makes her a highly coveted new artist in the entertainment field.

She is currently a radio DJ on RadioFreeBrooklyn with her own weekly show called “Virtual Voyager” and has had guest mixes on radio shows and livestreams for notable groups: Tantra Thursdays, UKO Radio, Sub.Sequence KUNM, Denver House Music’s Mix Wednesdays, and Synaesthesia Collective. As of February 2022, she has joined the illustrious online radio station, HalfMoonBK as a monthly resident DJ with her new show “Glitch Mode.”

Originally brought up in classical music at the age of 4 on piano, and then studying classical as well as some jazz flute at age 11, Girl Wunder has always been an avid musician. She had reached notable achievements at a young age, placing in the competitive New York State All-County and All-State Orchestras, and has had the privilege of performing at renowned Carnegie Hall 4 years in a row by the age of 17.

Girl Wunder’s introduction into electronic music began with her sister who was a promoter for many legendary clubs such as Webster Hall, Pascha NYC, and Club Exit, and a prominent influencer amongst the asian bboy/bgirl raver crews. Girl Wunder’s early collection of digital music began as her sister would bring home tracks and exclusive recordings from the DJs at those parties. Her discovery of Miss Kittin, Green Velvet, Acid Girl, and other influential artists of the time opened her mind to a new world of possibility with music as house music and the genre of techno was making a head in NYC. Today, as a DJ with an ear for complex melodies through her classical training, a love for acoustic instrumentation, and an education of early 90s rave culture, Girl Wunder attempts to combine elements of all her experiences within the selections in her mixes.

Girl Wunder enjoys traveling cross country to perform and collaborates alongside various collectives, with the goal of building a network of artists to create magical experiences for people to gather through music and art. Since DJing outside of radio, Girl Wunder has had the honor of playing for communities in 8 different states throughout the US. She looks forward to continuing her journey and connecting to more people and places this coming year.