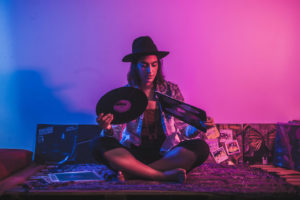 Facebook
Instagram
FlavYa is an independent Brazilian-American music producer & DJ currently based in Massachusetts USA. Flavya's eclectic style is based on grooves of music from traditional cultures around the world, with a special focus on Brazilian and Latin music: born in Europe, raised in both the United States and Brazil, Flavya is no stranger to multicultural experiences, living in diverse neighborhoods and being exposed to many different music communities.
Website

My goal is to create wellness-conscious empowering, cultural and artistic all-aged dance events for the community. I would love to bring the wellness community together to dance.

In her eleven years of musical career, Flavya has performed
at many festivals and parties in Brazil and the United States,
such as Carnaval for SESC in 2020, Coala Festival in São
Paulo, also Festival Sonido in Belém, Marisco stage and
Virada Cultural SP for Mareh, in 2019, Nublu Jazz Fest, Rec-
Beat do Carnaval do Recife 2018, Menos 30 Fest, by Globo
and Festival Vento in 2017 with other alternatives of
Brazilian music, as well as “Baila” during “Floripa Tem” in
Florianópolis, Wonderwheel Record’s holiday party, The
Assemblage, Sultan Room, Kingston Club, amongst others.
In 2019 she released her single “Vamos” together with Cuban
bassist Aniel Somellian, the project in partnership with Latam
magazine. She released an official remix of the song “Não
vou descansar” Francisco el Hombre, “Mil Vidas” – Bixiga 70,
and “Racha a Canela” by Braza, “Los Animales” by Corina
Lawrence, and “Se Apaga” by Gui Hargreaves. Also, she
produced the original single “Encarar” with Lurdez da Luz.

VAMOS // LATAM
Two artists create a song that unites Brazil, Cuba, and
the US (click to read more)